Home water: it’s not glamorous, it’s not the lifetime trip destination river, it’s not necessarily action water, going there doesn’t even need to be about fishing.

The stuff of this aquifer flooded my cells for the earliest years of my life. Bubbling up from the rocks beneath where my grandparents lived and my mom escaped a bull through a split rail fence and my dad coached high school softball, down coulees as sudden and hidden as a Himalayan valley, draining into the aqueous highway below the Harpers Ferry lock and dam where generations of my family drowned worms in a blue Lund and listened to whippoorwills and the Soo Line at night all summer long.

My daughter is as much of a tourist here as I now am. We throw pellets to trout in concrete impoundments and watch them swirl and thrash and swim towards us and away from the rightness of their instinct. The fences around the spring-fed races are electrified at night to keep herons off the product. We’re all transfixed for different reasons.

There’s a pool downstream of the pens where the diverted water rejoins the branch. In the last days of this dry summer a mixed pod of wild browns and specs seems to hold in clear air alongside the cerise stripes of hatchery rainbows thousands of miles and generations from their mountain home. We watch from the high bank, rod unstrung. The Monster drops leaves on their heads and watches only the streamborn fish scatter. 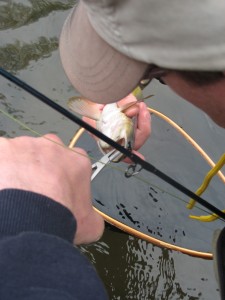 The punter evening shift was hiking down as the the punter day shift – the Dark One and your author – were hiking up. Their waders were all dry and did not have goose shit on them. Their hands did not smell like fish slime and beef jerky, and were not coated with the earthly residue of mashed-up midge larvae or mayflies squished on the wing.

“Get any?” the evening shift asked.

Ninja, please. Do you see any Thingamabobbers?

Lots of each are nice but sometimes one is all you need.

The one need not be big or rare, just timely.

The clutch fish turns the day around. The clutch fish improves your subsequent casts, unfurls your leader, betters your drift, lets you carom flies off trees and leaves and onto the holding lie; it lets you laugh full-throated at missed strikes, makes you feel smarter than you actually are.

Today’s one was my first fish of 2012, and she came from way up a feeder creek that was running clear while the main branch was becoming higher, cloudier, and colder as the sun melted snow off the bluffs miles upriver. Crawling over old elms downed in last year’s flood, tiptoeing through ankle-deep water on flat cobbles that looked like they were hovering under rippling air, casting upstream to every broken top deeper than my boot.  In the trough of a long riffle the drift brought up the fish that would have busted the slump and I missed the take, but when I made the cast again she came back – a little nosy blip and a flash of wormy olive and the weight was there, fighting to gain what passed as deep safety in that austere March stream. When she was close enough to net I saw she was a spec, a brookie, a streamborn native and that my year on the water was starting auspiciously. The hook was fair in her left maxilla; her right pectoral fin was torn along one of the rays. She rested in my cupped cold fingers for a while and breathed water and then pushed back into the creek and turned invisible again. And as I sit at home with a glass of beer and a picture I hope this hard winter is coming to an end, and I hope she ate a big fucking dinner of stonefly tonight. 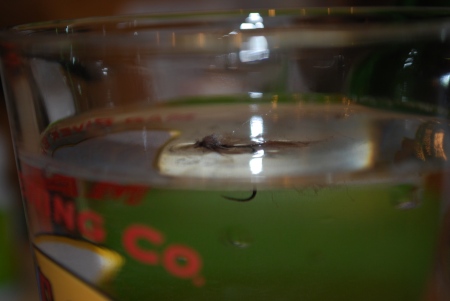